FC Dallas wanted to create an experience within the stadium for their fans to interact with. The Chief Marketing Officer had previously installed murals to launch AR experiences within other stadiums and knew it was a great way to add and increase fan engagement. FC Dallas was also in the middle of a rebrand, so it was great timing for them to spend some of that budget on creating new immersive spaces within the arena.

Normally within stadiums, there is little to no fan engagement in addition to the sport or event that is on. But sports players, including those from FC Dallas, really like to see and be a part of fan engagement.

They wanted to install something different to engage the team, the players and the fans and were excited to create and be a part of something new.

There were three murals created and added around the stadium that would all activate when scanned. The murals highlighted three FC Dallas players which fans could start to engage with. The players approved of the mural installation and visited the stadium to experience the AR themselves.

The mural images were very large measuring 20 feet wide and 10 feet tall and printed in 4K. Fans would interact with the mural turning the 2D players into 3D

Fans could activate the mural which unlocked an explosive animation where the players burst out of the mural with electric visuals and roaring sound effects. Once in 3D, fans could view three of the players displaying their signature game move. 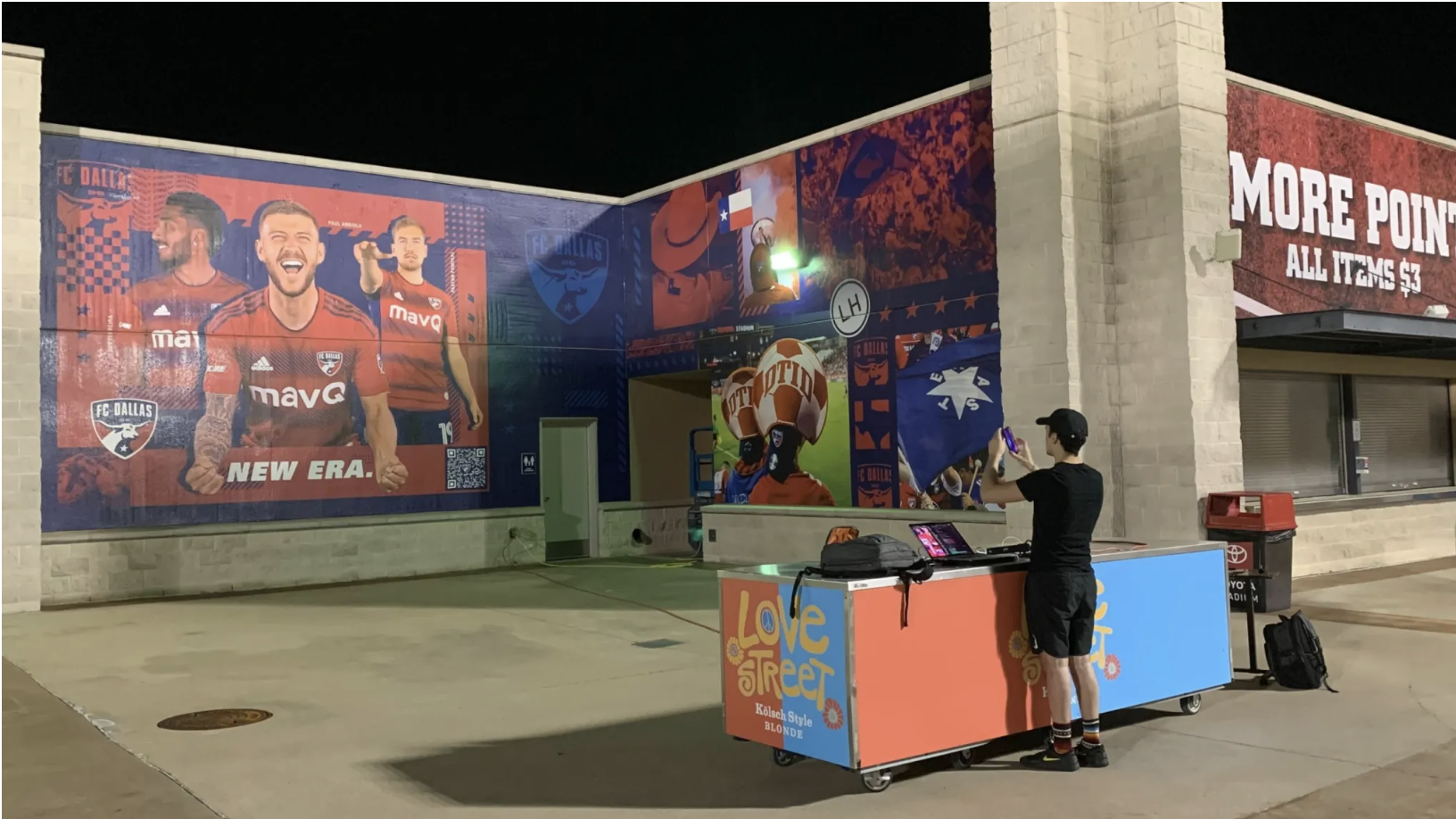 Groove Jones captured footage of players on the pitch and then passed these to the animation team to recreate. Once this had been completed the players visited Groove Jones’s hub in Dallas to capture some volumetric video where 50 4k cameras photographed the players to create an XR avatar. 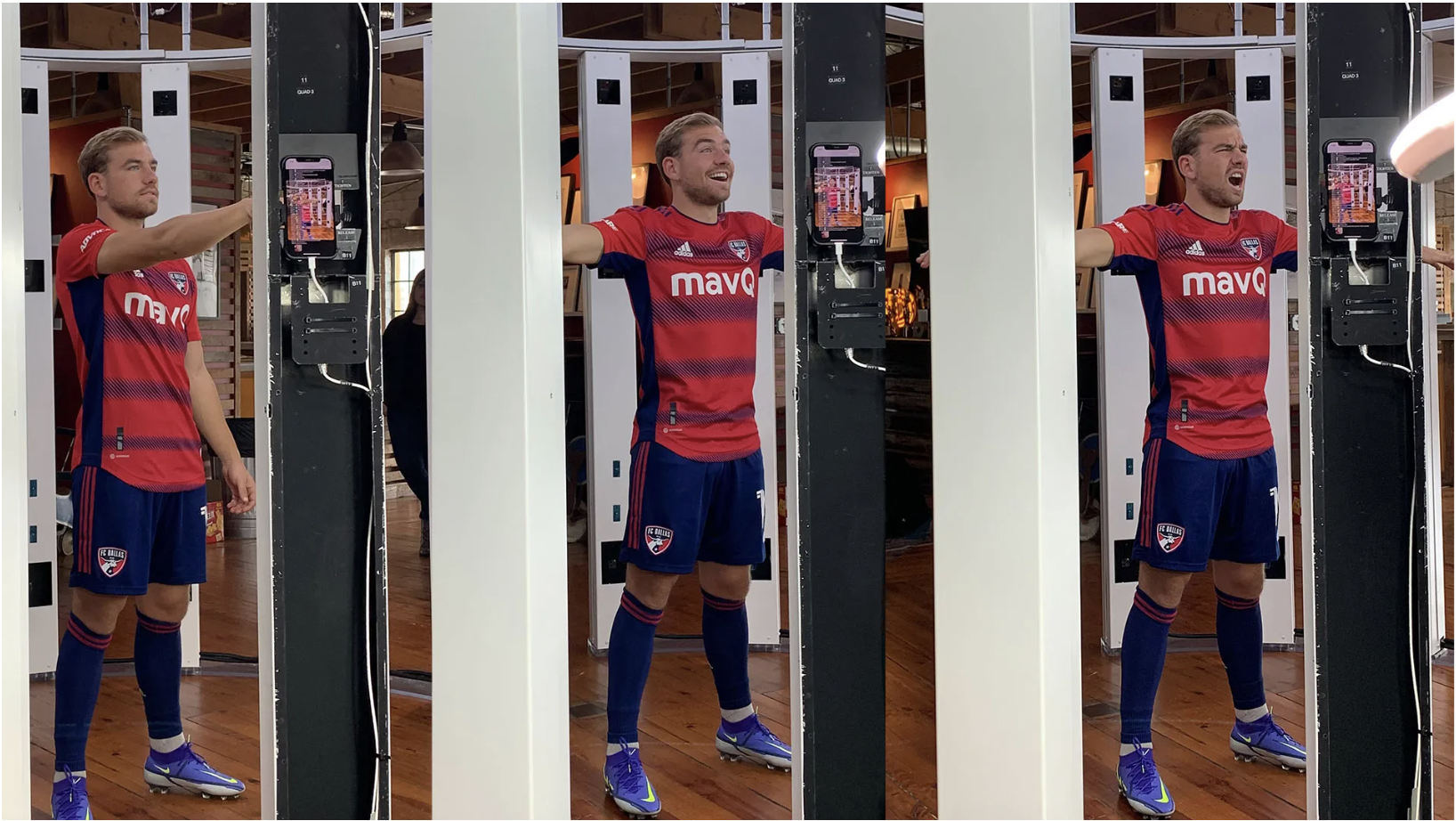 Groove Jones then used the ZapWorks Universal AR SDK, React-Three.js to create the avatars of the players and complete the experience.

Initially, the plan was to use this volumetric video to display the player's moves, but this would have created a  huge file size. The experience had to have a reasonably small file size, as on game days the bandwidth would be limited. The file sizes needed to be reduced whilst keeping the experience engaging.

There were also placards, pull up banners and floor stickers to promote the activation dotted around the stadium to raise awareness and get more fans excited to try the experience.

The murals combined with the banners, stickers and placards were perfect for getting people involved and excited. As the experience was advertised in so many places across the stadium, fans were also able to see others activating the experience which made them more likely to engage.

Groove Jones shared some great advice for anyone looking to carry out their own large scale activations.

1. Make sure you have good bandwidth for where you are launching the activation. Wherever the experience is going to be activated or appear, you need to test it to ensure it works for 1 or 1000 users.

2. It is also useful to consider the environment where the trigger sits. We use a lot of image tracking for our activations and the lighting available significantly impacts the experience. For example, shadows of buildings or the movement of the sun can impact what is in shade and make the image less scannable to activate. Alternatively, the addition of glass i.e. on a bus stop, can impact the image as with reflection it may stop the camera from identifying the image.

3. Learn by doing! We have made mistakes on some AR experiences, but we have really learned from them and not made the mistakes again.

Dan Ferguson, Founding Partner at Groove Jones will be sharing more insights in our webinar on the 25th October, Sign up here and save your spot.

Find out how Sibling Distillery and PinPoint Media doubled dwell time with WebAR launched from bottle. A stand-out example of how to implement AR in the alco-bev industry.

Zappar hosted an internal hackathon where our team created engaging AR experiences. Find out what made the experiences were successful within the hackathon.