PLAYAR are a full-service AR agency based in Antwerp. With a team of 15 people, they create experiences which are immersive and entertaining for brands and agencies on social media and in WebAR.

PLAYAR worked with Samsung Retail to launch the new Galaxy Z Fold3, Galaxy Z Flip3 as part of their new retail experience stores across the world. Samsung wanted to create and launch something to promote the new products within 850 stores spread out over Belgium, Luxemburg and the Netherlands. The experience would also be shared within newsletters, print advertising and out-of-home advertising near bus stops.

Samsung wanted to promote the Galaxy Z Fold3 and Galaxy Z Flip3 with a series of web-based augmented reality (WebAR) experiences to showcase the new smartphones and their benefits to the consumer without focusing too much on technical information.

Samsung wanted to display the ability to flip or fold the devices, highlight the different colours of the products and make the devices come to life. They also wanted to depict the devices as an addition to your lifestyle, putting the user front and centre in the discovery of the new foldables. This was the challenge, now the puzzle was how to create the experience to engage their audiences. 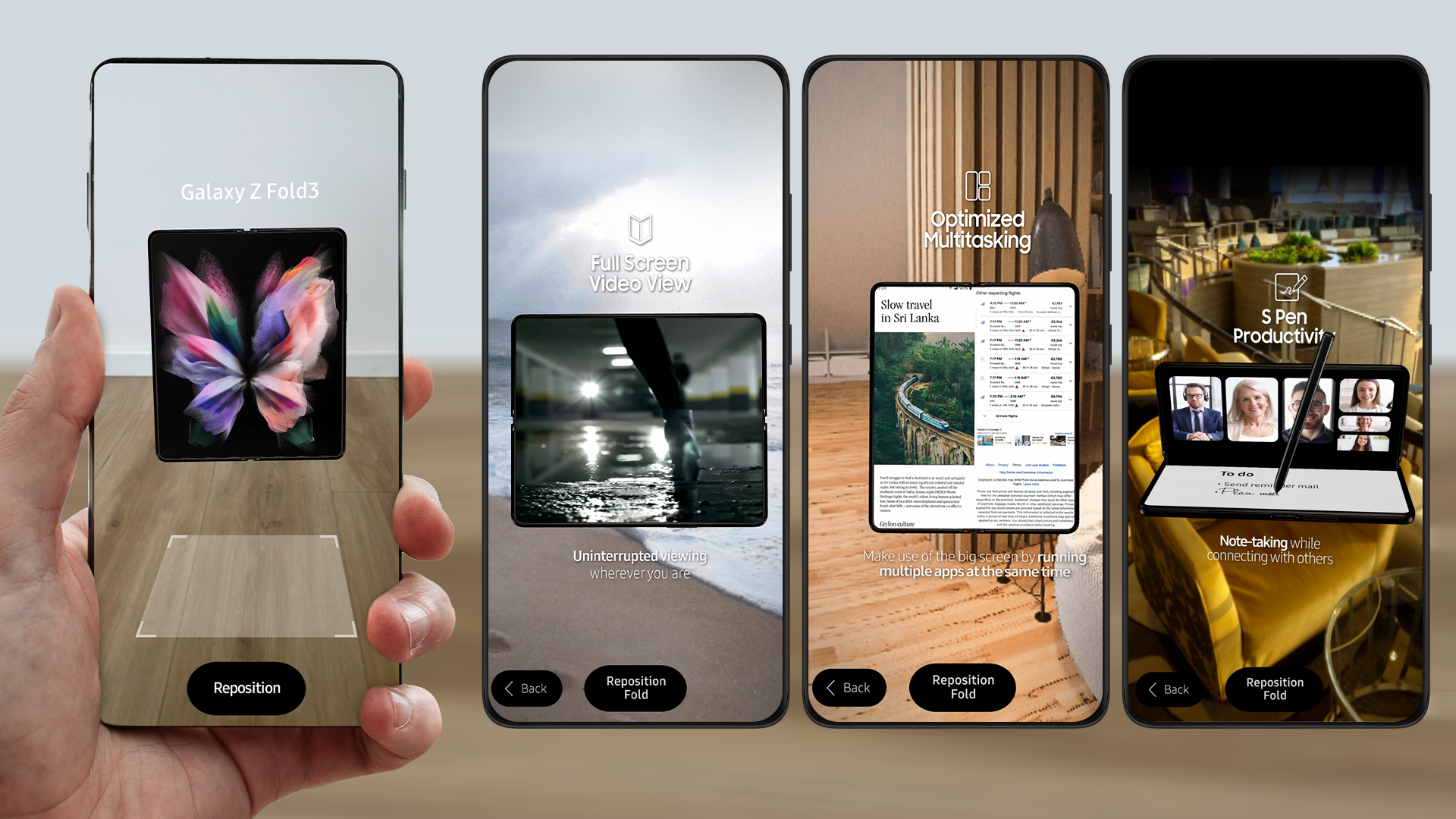 With this in mind, PLAYAR worked in close collaboration with Samsung to create a WebAR experience that put the consumer at the centre of the product discovery process. This meant having high-quality assets of the smartphones that PLAYAR could translate into AR to engage and immerse users.

When Samsung approached PLAYAR, they already had some ideas and assets created which aided the speed of creation. These included high-quality 3D models of the Galaxy Z Fold3 and Galaxy Z Flip3 which were compressed and optimised for WebAR.

Once the models had been compressed, they could move on to how the experiences would be animated and how the devices would come to life. Samsung had a few ideas on how they imagined the products would be animated which PLAYAR then worked into the AR experience, factoring in the context and environment of the end user.

During the demonstration phase, the PLAYAR team shared regular screen recordings of the AR experiences while also describing what was happening to give more context and oversight. This helped to show the Samsung team what each animation, interaction and detail would look like and proved a useful step within their collaboration, especially when working remotely during the pandemic.

The final stage was testing. Members of the team at Samsung were then given QR codes so they could load the experience themselves, navigate through and engage withit first-hand. Overall, the experiences were created and launched alongside the products within 2 months, a fairly quick turnaround for a project of this scale.

Samsung wanted to showcase the devices as much as possible and also highlight how the features would benefit the user. They wanted to avoid focusing on the technical features too much within the experience and more on the use cases and how the devices would fit in with the consumer's life.

To achieve this, PLAYAR created three unique scenes for each smartphone as well as adding the same for the Galaxy Watch4 Series at a later date. Each experience contained a series of stories on how you could use the device as well as how it would fit with you and your lifestyle.

The Galaxy Z Fold3 5G user experiences were created to show that device owners can watch, work and play in any situation. Once the QR code is scanned, users are transported to a beach, a hotel lounge or their living room. This helps the user to understand how each feature of the device could fit into their lifestyle.

As for the Galaxy Z Flip3 5G, the target audience were trendsetters. Capturing their lives on the go, it showcases the advantages of a pocket-size stand-alone smartphone by telling small stories by the pool or in the park with 3D objects.

And last but not least, the Galaxy Watch4 series (Watch4 and Watch4 Classic), transported users to a tennis court or on a bicycle to demonstrate how the Galaxy Watch4 can check your body composition and blood pressure. 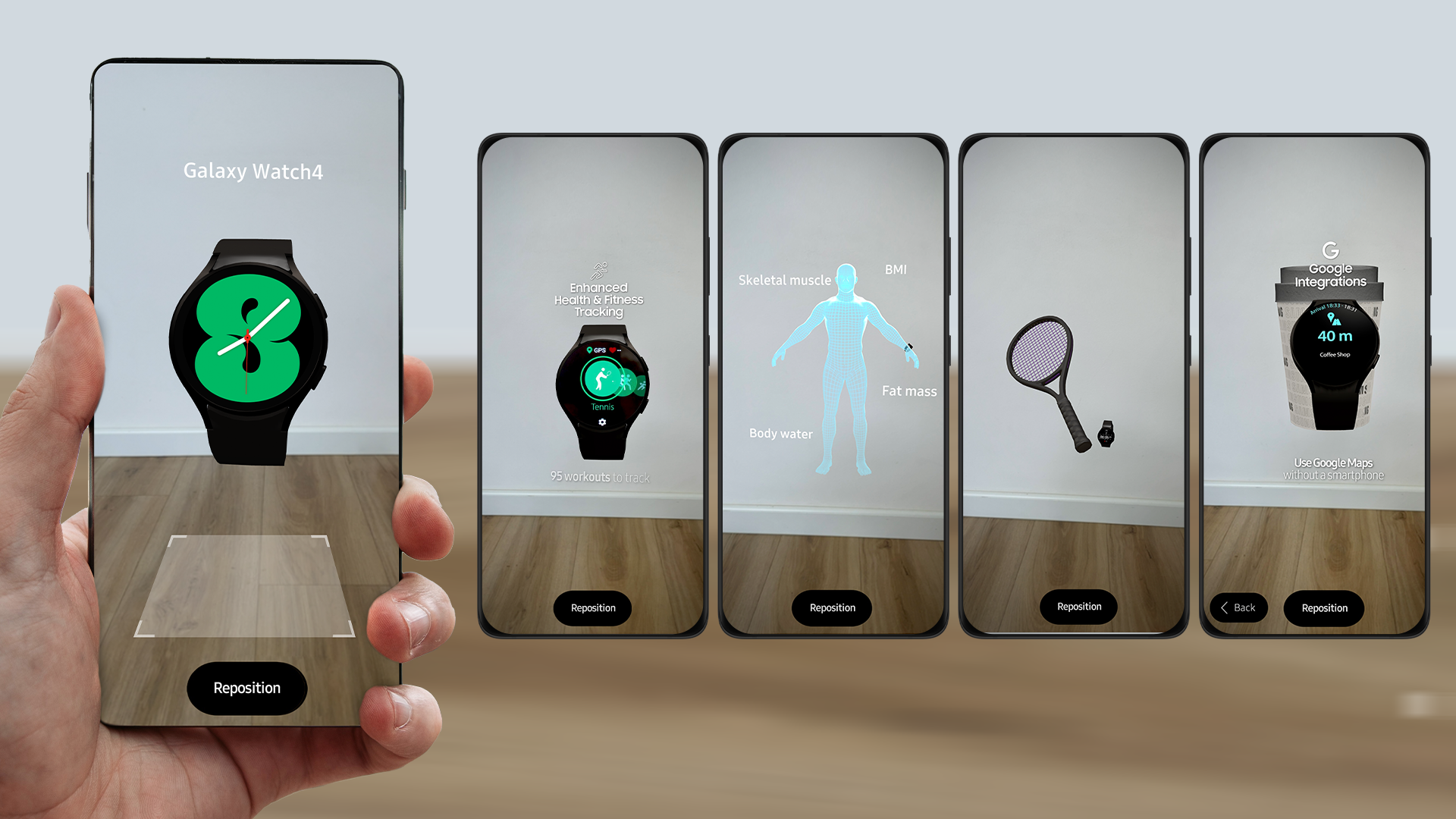 The experiences were launched from a QR code within 850 Samsung Retail stores across Belgium and The Netherlands. The QR codes were displayed on digital screens, newsletters and Wobblers (a tag which is stuck to the shelf and literally waving to grab the consumer's attention), to gain as much interaction from consumers as possible.

The experience was also accessible to customers in the Netherlands by browsing online through a landing page on the Samsung Website.

The experiences were added to point-of-sale displays within stores as the three devices were launched. This was a strategy to get consumers hands-on with devices as soon as they launched. Some stores were unable to get access to physical devices, both display models and sellable stock for a while after launch, yet Samsung was still keen for people to experience the devices in order to drive sales.

PLAYAR found it easy to build the experiences using the PlayCanvas integration from our Universal AR suite. They found it to be a great tool for creating 3D models and also adding animations to the scenes.

This is down to a number of things including the community using and interacting with PlayCanvas. The team had some questions during the creation of the experience and there were always people ready to help them out and give hints on how to tackle the problem.

Collaboration internally and externally was also really simple. It was easy to add other members to your projects so multiple people could work on the project. For external collaboration, there was access to version control and it was also really easy to publish an experience for the client to test or carry out an internal review.

The material editor was very convenient to use and colours were easy to set up and tweak. Lighting was easy to control and could be set up for each individual scene. You could also preview the results of the lighting, material and colour changes within the scene view. To ensure the lighting was set up correctly for each scene

When creating the experience, the ability to autocomplete lines of code and access to the online editor were really handy for the developers to see what was possible within PlayCanvas.

Creating three unique product demos for Samsung in AR allowed them to showcase the products in a new light, personifying the devices and making them infinitely more engaging beyond what 2D video and imagery can offer. The experiences were all about storytelling and Samsung really liked how people, their customers could relate to them.

There were other distribution methods that could have been considered to get more reach and engagement on this project. While also potentially exploring offering an incentive for interacting with the AR.

PLAYAR found it particularly useful to keep the project open on their smartphones to view the experience and then do any adjustments within PlayCanvas on the fly. That way you don’t have to upload the project over and over again and you could instantly see the impact of their changes and significantly sped up the creative process.

The built-in version control was also handy for testing. PLAYAR were able to be creative and test, if it didn’t work out the way they hoped or envisioned then they could revert our changes to a previous version and try something else instead.

Find out how Zappar helped NBC Universal create a flexible and engaging retail WebAR experience, for the release of the Jurassic World Dominion film.

Find out how Sibling Distillery and PinPoint Media doubled dwell time with WebAR launched from bottle. A stand-out example of how to implement AR in the alco-bev industry.